Greenlawn Home Health was able to overcome an early deficit to pick up an important 12-11 victory over the Poarch Creek Indians Tomahawks in Babe Ruth baseball action at Tom Byrne Park.

The Tomahawks were the first on the scoreboard scoring four runs after holding Greenlawn scoreless in the top of the first.

Kevin Vaughn, Zack Wall, Chance Jackson and Hunter Rigby made the most of their trips to the plate as t hey each scored runs with Vaughn having the hit of the inning ripping a double.

Greenlawn responded with two runs of their own in the top of the second as Malcolm Black and Brett Helton crossed the plate cutting the Tomahawk’s lead to two.

The Tomahawks bounced right back in the bottom of the inning as Quentin Smedley and Vaughn made the trip around the basepath to put their team up 6-2.

After another scoreless inning by Greenlawn, the Tomahawks extended their lead to six with Rigby and Justin Davis scoring.

Three runs by Black, Helton and Jonathan Griffis in the top of the fourth inning helped Greenlawn get on track as they made the score 8-5.

Greenlawn finally stopped the Tomahawks for consecutive innings and added one more run to scoreboard in the top-half of the fifth with Dalton Daniels scoring.

The Greenlawn defense was able to hold off the comeback attempt by the Tomahawks as only three runs could get across the plate as Rigby, Davis and Winston Barron scored before the final batter was called out to end the game. 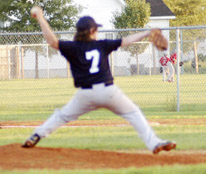 Atmore Utilities Board pitcher Tanner Smith slings a pitch during his team’s loss to the Poarch Tomahawks Monday. | Photo by Chandler Myers

A strong arm and hot bat were keys in the success of Northview’s No. 1 pitcher and this year’s Atmore... read more