There were several firsts during the Poarch Band of Creek Indians’ annual celebration at Magnolia Branch Wildlife Reserve this past weekend.

The sixth annual event was rescheduled from the first week of August to Labor Day weekend due to a bank stabilization project being performed at the Reserve, which forced its closure for several months this summer. The Tribe’s first-ever runoff election was also held on Saturday shortening the Saturday event in order for Tribal members to cast their votes prior to polls closing.

“It went really well,” she said. “All of the campsites were full, so we estimate 500 to 550 already in the park and they clocked 2,507 people coming through the gate that morning. We had great attendance.”

Following the shortened celebration, polls closed and the runoff election ballots were counted.

“It’s usually an all day event, but we did encourage Tribal members to go vote throughout the day or before or after the celebration, so we ended early to allow them to go vote,” Jackson said.

Incumbent Tribal Secretary David Gehman defeated William Bailey 560 votes to 430 to reclaim his spot on the council and Robby McGhee defeated Amy Bryan 576 to 423 for the treasurer’s seat.

“We actually had a great turnout,” Gia Rodriguez, chairman of the Tribal Election Board, said. “We had a total of 1,004 Tribal members vote in the runoff election. That’s very good.”

Rodriguez said the totals included a combination of absentee, walk-in and Election Day votes. She believes the Tribe’s annual celebration may have been a factor in the total number of votes cast.

“In some ways the celebration helped because there was more people in town and that’s why I believe we got a larger total of votes,” she said.

Rodriguez added that a majority of the voters chose to cast their ballots by way of walk-in voting, which were held Monday through Friday beginning 31 days prior to election

Both Gehman and McGhee will be sworn in later this month.

As for the annual celebration, Jackson, whose office coordinates the event, said she is unsure if the celebration will be moved back to August because of the conditions Tribal members enjoyed in September.

“The weather was beautiful, we couldn’t have asked for a better day,” she said.

Jackson said hundreds of Tribal members began arriving early at Magnolia Branch with the blessing of the food being held at 11:30 a.m. She said those in attendance then enjoyed a variety of food including fried fish, fried chicken, French fries, lima beans, fry bread, salt meat, gumbo, roasted corn and shaved ice to cool them down.

“We had approximately 85 people that volunteered to cook, prepare and serve the food for the event,” she said.

In addition to fellowship and eating, many Tribal members enjoyed the amenities at Magnolia Branch and live music.

“There has been a lot of work on the creek banks, so a lot of people swam, but others did a lot of fellowshipping and singing,” Jackson said. “We had several of the different local churches perform at different times. We also gave away a lot of door prizes.”

The annual celebration is held yearly for Tribal members and their immediate families as a reunion. It started in 2004, celebrating the Tribe’s 20th anniversary of becoming federally recognized, which occurred the first week of August 1984. 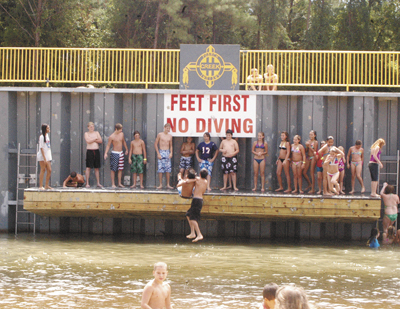