Northview’s rushing attack lit up the scoreboard Friday night with five players scoring touchdowns on the ground as the Chiefs scalped their district foe the Bozeman Bucks 48-14 in Bratt, Fla. Friday night.

The Chiefs (3-0, 2-0) put more than 330 yards rushing against the Bucks as they pounded away from the first quarter until the final whistle.

“I thought we played our most complete game this season,” Wheatley said. “We started fast and finished fast. I challenged them to do that, and they came away with a big win for us.”

Chiefs sophomore running back La’Mikal Kyles put the first points on the board for either team when he took a pitch and scampered 38-yards to pay dirt with the pigskin to put Northview on top 7-0.

After recovering a Bozeman fumble, the Chiefs took over on the Bucks’ 40-yard line and went 60 yards in five plays with junior quarterback Brandon Sheets avoiding the pass rush and turning it into a 23-yard scramble to the end zone that gave Northview a 14-0 lead with the extra point early in the second quarter.

The scoring continued on the next Northview drive as Kyles scored his second touchdown of the game this time by stripping the ball from a Bucks runner and turning it into a 32-yard touchdown for a 21-point Northview lead.

The Chiefs’ defense tightened once again against the Bozeman offense driving them backwards from their own 19-yard line to their own two and forcing a punt.

It only took the Northview offense five plays to score their fourth touchdown of the night with this one coming through the air courtesy of Sheets who hit receiver Jake Clayton for a 25-yard connection putting the Chiefs up 28-0. Sheets finished the win with three carries for 24 yards and connected on two-of-three passes for 38 yards.

After another quick Bucks possession, the Chiefs went back to the ground with the trio of Levi Gideons, Dustin Yuhasz and Montaio Mitchell driving the ball down the field behind a powerful offensive line.

The drive lasted six plays with Mitchell getting the score from 54 yards out as he followed his blockers and shook a defender to get to the end zone. The Chiefs missed their extra point and went into halftime leading 34-0. Mitchell carried the ball three times for 84 yards in the victory.

Wheatley said his offensive line and backfield did a tremendous job of controlling the game.

“They all did a great job,” Wheatley said. “We have several backs who if they have a crease will take it to the house, and they all did excellent running the ball. Our offensive line really played well and did what we needed them to do in this game.”

Once the second half started, the Chiefs picked up where they left off thanks to a fumbled kick off by Bozeman that set Northivew up on the Bucks’ 31-yard line.

Roderick Woods received all but one carry in the six-play drive scoring on a five-yard run to the end zone. Woods finished the game with 58 yards on 10 carries.

Down 41-0, Bozeman finally made it down the field thanks in part to a pair of personal foul penalties against the Chiefs that set them up inside of Northview’s 10. Two plays later they turned their fortune into their first touchdown cutting the lead to 41-7.

Yuhasz extended Northview’s lead again on their next possession midway through the fourth quarter as he broke through a hole and sprinted 80-yards on the Chiefs’ first play from scrimmage to put the score at a staggering 48-7. Yuhasz finished as the leading rusher with 119 yards on seven carries.

Bozeman made one final push to the end zone driving down the field against the Chiefs’ second team defense to get a moral victory as they scored the final touchdown of the game ending the game at 48-14.

Next week, the Chiefs face the Baker Gators in Baker.

Wheatley said the Chiefs will need to be prepared for a tough challenge.

“It’s going to be a tough game for us,” Wheatley said. “Baker is playing well right now, and they doing a good job of throwing the ball around, so our secondary will be challenged. We just have to be ready and prepared to play a complete game.”

The Chiefs and Gators kick off at 7 p.m. 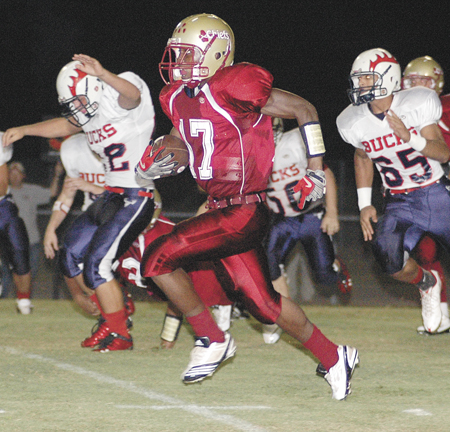 Northview running back La’Mikal Kyles runs away from Bozeman defenders in the Chiefs 48-14 victory Friday night in Bratt, Fla.|Photo by Chandler Myers

Midway through 2010 Cougars still have work to do

There have been ups and downs for the Escambia Academy Cougars who five games into their 2010 season sport a... read more