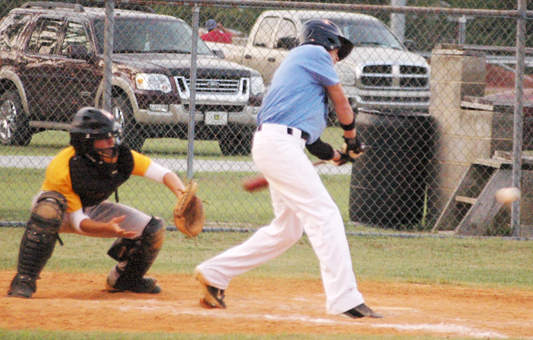 Carney Lodge played the late game against the Atmore Utilities Board winning 5-0, while Jerry’s Alignment Center picked up a 12-6 victory over Atmore Vision Center.

Things are heating up in the Atmore Babe Ruth league with Greenlawn Home Health currently sitting undefeated with a 6-0 record.

In what turned out to be an easy victory, Carney Lodge #549 was able to use their talents at the plate and on the field to shut out the Atmore Utilities Board 5-0 on Thursday night at Tom Byrne Park.

Aaron McDonald (1-for-2, 2R) and Kevin Vaughn (3-for-3, R) were catalysts for Carney Lodge helping their team earn the win with a combined four hits and three runs.

Carney Lodge shut down Atmore Utilities in the first inning with the first three batters hitting straight to Chasen Freeman (2-for-3) at second base.

In the bottom of the first, Carney Lodge jumped ahead 3-0 with Brannen Freeman (0-for-2, R), McDonald and Vaughn crossing the plate.

The teams then went to a stalemate with neither earning a run in the second, third or fourth innings, but Carney Lodge added two runs in the bottom of the fifth.

With their final turn at the plate, Carney Lodge’s McDonald and Nate Smith (1-for-3, R) found a way onto the base path and were knocked in on a single by Vaughn to give them a 5-0 lead with the time limit giving them the win.

Offense was easy to come by in the Babe Ruth game between Jerry’s Alignment Center and Atmore Vision Center, but a change of fate late in the game allowed Jerry’s to earn a 12-6 win on Thursday at Tom Byrne Park.

Both teams erupted for runs in the first inning with the teams scoring six runs each, but a stall by Atmore Vision Center pushed Jerry’s forward for the win late in the game.

Jerry’s broke the tie in the top of the second with four more runs courtesy of Bell, Montgomery, Andrioli and Sawyer scoring, but the game out of reach in the top of the third with Tullis and Andrioli each crossing the plate one more time to put Jerry’s up 12-6.

With an offensive stall following the first inning, Atmore Vision Center was unable to score any more runs falling to a powerful Jerry’s Alignment Center team.